Like most great cities around the world, Seoul has a vibrant performing arts scene with world-class venues across the city showcasing both local and international talent. But if you are like most young people travelling through Korea and don’t have room in your budget for tickets to see plays and musicals at the LG Arts Center, let me introduce you to a place nicknamed the ‘Play Mecca’ of Seoul. This is Daehakro (대학로). At first glance it may not look much different to the busy streets of Myeong-dong or Gangnam, but if you look closer you’ll find that Daehakro is the home of more than 30 small theatres and a colourful selection of locally written and produced plays and musicals. As you walk through the alleyways you’ll notice posters and signs for all types of productions and you’ll probably be approached by a young guy with a bunch of pamphlets in his hand trying to sweet-talk you into buying tickets from him.

Purchasing tickets from these street vendors is probably the easiest way to get tickets to a show, especially if you’re in the area having dinner with friends and just make a last minute decision to watch something together. Given the number of productions that are running each night, there’s no need to make advance bookings – there’s always tickets available and you can even buy them as you’re walking into the theatre.

Last week, my friend and I were in the area hoping to see a show and bought tickets to play called “Secret” (시크릿) from a guy who convinced us we were getting an absolute bargain for “Royal” seats at 20,000 won each for one of the most popular plays in Daehakro. I had a sneaking feeling we were getting ripped off, but the price seemed reasonable and the guy was so honest about the quality of the show so we just ended up buying them. We walked into the theatre which was a shoe-boxed sized basement with a stage the size of a bedroom, but we found comfort in the fact that there were about 20 other people there to watch the show too. “Secret” is a romantic comedy set in a psychiatric hospital – it starts as a slapstick comedy involving the antics of two patients (one who thinks he’s the President of Korea) and their kooky nurse, but takes a dramatic turn halfway when a new female doctor is introduced and becomes a tragic romance involving betrayal and memory-loss, and a sombre meditation on the meaning of life. There were lots of a big laughs, some awkward audience participation and my eyes even got a bit glassy at one point. The performances were terrific and made me wonder whether I’d see these faces on TV one day.

Daehakro isn’t just a playground for theatre-nerds, I would recommend anyone with an interest in Korean culture to see a play here – it’s a great way to get some deeper insight into the culture that goes beyond K-pop and K-dramas. Because the plays are mainly amateur productions, they provide a freer platform for satire, edgier humour and social criticism, and seem to be intended to highlight, rather than cover up, the grittier parts of Korean culture. Of course, all plays are acted in Korean but if your Korean language skills are at a level where you can watch dramas and know when to laugh and when to cry, you should be able to understand enough of what is being said to enjoy yourself.

I’ll leave you with some tips for choosing a play and buying the tickets: 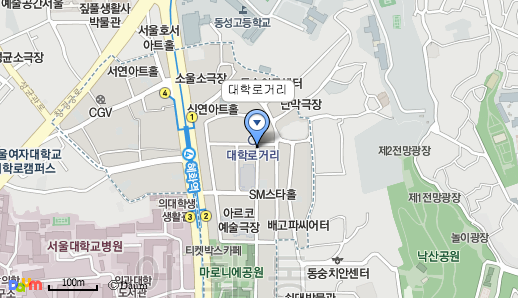