If you Google “Best brunch in Seoul”, travel sites, food bloggers and CNN will tell you that you’ll find it at The Flying Pan Blue in Itaewon. Being a brunch enthusiast, I couldn’t wait to try this place out – especially since I’d been missing the crusty bread, soft-poached eggs and crispy bacon of Aussie-style breakfasts. The first rule of brunch is that it must be stylish, and The Flying Plan Blue certainly ticks that box with its elegant interior of high ceilings and mis-matched European style furniture. These little egg-cups and knitted cosies were adorable too.

The second rule of brunch is that there must be a wide selection of menu options – because ‘brunch’ has a different meaning for everyone. For me, it’s indulging in a calorie-fest of thick toast, eggs, bacon, sausages, hash browns and anything else that’ll fit on the plate washed down by a big mug of coffee – justified by the fact that I’m combining two meals in one. For others, it’s the sweet indulgence of a pancake stack or waffles. For light eaters it’s a salad and a smoothie. For people who believe ‘brunch’ is just a fancy way of saying ‘lunch’ it’s a sandwich or a burger and fries.

The Flying Pan definitely succeeds here too, with a large broadsheet newspaper menu that has options for fatties, dieters, carnivores, vegetarians and sweet-tooths alike.

For brunch I usually order whatever is called the “Big Breakfast”, but that wasn’t on the menu so I ordered the “Flying Pan Breakfast” (17,500Won) figuring it would be much the same, without reading the menu description properly. That was a big mistake. The Flying Pan Breakfast turned out to be the vegetarian version of a “Big Breakfast” – grilled tomato, spinach, potato salad, sauteed mushrooms, a poached egg and pesto. This was not what I was hoping for, but seeing as it was my own fault for not reading the menu properly, I was happy to be fair and give the dish a chance. Unfortunately, the disappointment only continued. The spinach was underwilted, the tomato was fresh, not grilled, the mushrooms consisted of asian varieties such as enoki and shitake that belonged in a Thai stir-fry and not on toasted bread, and the creamy potatoes were just a strange, confusing addition to the plate.

But worst of all, this dish broke the cardinal rule of brunch:

The poached egg was hard-boiled. No, no, no, no, no! A poached egg should have a silky, golden yoke that oozes out onto your plate on the touch of a knife. This is not a poached egg and I was really surprised that a restaurant that appears at the top of so many lists would serve this up.

My friends did slightly better with their menu choices… It might have just been a bad day in the kitchen – I told some friends about my experience at the Flying Pan and they were shocked and only had good things to say about the food. But on the other hand, you need to remember that the Korean people eat soup, rice and kimchi for breakfast. “Brunch” is a Western import and it’s unfair to expect the same standard in Seoul as what you’d find at the beach cafes of Sydney.

Maybe next time I meet a friend for breakfast, I’ll go out for Haejangguk and just embrace the city and culture I’m living in now – because before you know it I’ll be back home with guk-bap cravings in the morning!

Have you had a better experience at The Flying Pan Blue? Where are you favourite brunch places in Seoul? Let us know your thoughts in a comment below!

The Flying Pan Blue is a short walk from Itaewon Station, Exit 2 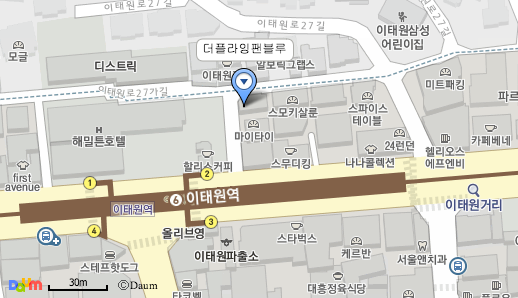